The National Union of People’s Lawyers in the Philippines, an IADL member organization, convened its Fifth Congress on 19 October 2019. The NUPL has been on the front lines of the struggle for justice in the Philippines, and faces unjust targeting, persecution through bogus criminal charges and lawsuits, and extrajudicial killings and threats of further harm through red-tagging.

The IADL sent its greetings to the Congress from the National Lawyers’ Guild’s Law for the People convention in the United States, where IADL President Jeanne Mirer, Bureau Member Suzanne Adely and NLG International Committee co-chair Jackelyn Mariano organized a collective salute to the NUPL.

The NUPL Congress issued the following statement, emphasizing its resolve to continue the struggle. We are also publishing here the remarks of Edre Olalia, president of the NUPL and Bureau Member of the International Association of Democratic Lawyers.

Prepares cases against Pres. Duterte in 2022 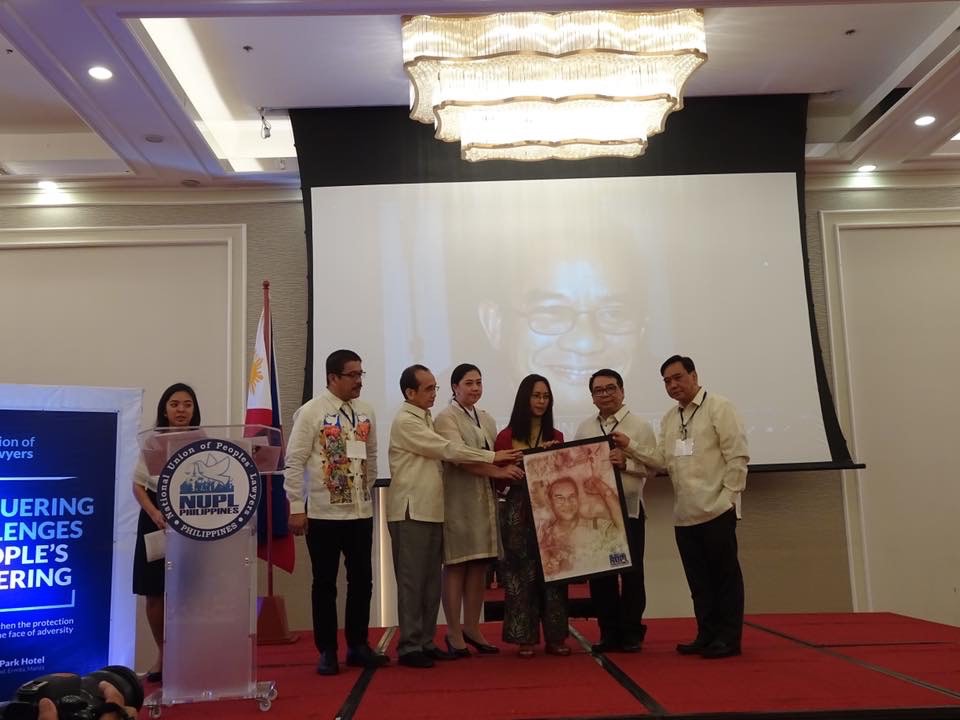 The National Union of Peoples Lawyers (NUPL) today resolved in its 5th Congress to file a series of cases against human rights violators and what it calls the infrastructure of impunity in the justice system–those who shield these perpetrators from punishment and accountability.

“Our 5th Congress approved the plan for NUPL members to start preparing a series of criminal cases against  State security forces who commit EJK and other human rights violations.  We will also ask other lawyers groups to help in what we hope to be the filing of voluminous cases against the perpetrators of these heinous crimes.  Our members all over the country will also file cases against members of the PNP who refuse to investigate the killings while filing harassment cases  against activists.  We will also file cases against witnesses who commit perjury  in these trumped up charges” said NUPL Pres. Edre Olalia.

“There have been reports of the scheme of the police of filing complaints against activists purposely using a false address so that the accused will not be able to answer the summons of the prosecutors.  Should we find that prosecutors purposely and maliciously filed cases against activists without undertaking due diligence in ensuring that the accused are given the chance to counter these complaints, we will not hesitate to also file administrative cases against them”, he added.

NUPL Chair. Neri Colmenares also revealed more complaints to be filed against Pres. Duterte in international bodies such as the UN to serve as templates for cases that will be filed against him once he is out of office in 2022.

“The justice system in the Philippines is unable to provide legal remedies to victims of EJK and other human rights violations because as Pres.  Duterte claims, he is immune from suit.  That is why we will pursue more cases against him in the UN and other international mechanisms for now.  However, these cases will serve as preparations for the domestic cases that will be filed against him once he is out of office.” Said  NUPL Chairman Neri Colmenares.  “Pres. Duterte cannot even promise members of the police and military that they will not go to prison because even Pres. Duterte himself cannot escape criminal accountability once he steps down from office.  Section 9 of   RA  9851 provides that “ official capacity as a head of state or government xxx shall in no cases exempt a person from criminal responsibility”.

FACE THE FIERCE FIGHT
WITH SAME FIRE IN OUR BELLIES

Twelve years after we decided to unite as one, we come here together again to pause, look back, take stock and brace for what lies ahead of us.

In 2007, human rights lawyers and law students from all over the country fulfilled a vision and decided to come together – not merely to intensely debate where to put the apostrophe in our organization’s name – but to finally unite as law professionals for the defense and protection of human rights and the assertion of national sovereignty.

We proudly called ourselves the lawyers of the people, to provide pro bono legal services, pursue different campaigns, conduct research and education, churn out publications, build international solidarity, and organize what many thought was the unorganizable.

Recalling the keynote address then, by calling ourselves  the ‘people’s lawyer,’ we have made a remarkable choice. We have decided not to remain in the sidelines. Where human rights are assaulted, we have chosen to sacrifice the comfort of the fence for the dangers of the battlefield. “But only those who choose to fight on the battlefield live beyond irrelevance.”

So we chose to make a difference. Thus 89 of us first assembled in Cebu in 2007 as a response to the needs of those times when activists got shot and went missing, and when lawyers were already being killed. We met again in Pasay in 2010, Bacolod in 2013 and Legazpi in 2016 when our numbers reached 500 spread in more than 20 chapters nationwide.

And yes, look around and you will see not only familiar faces but new and young ones who will be ready to take on the baton we will pass on.

Now on our 12th year, the NUPL remains ever committed to peoples’ lawyering and its principles, using our practice in the context of the struggle for the demands and aspirations of the Filipino people, especially the poor and the oppressed.

We, as peoples’ lawyers, have advanced the alternative vision of the rule of justice, challenged the traditional norms of legal practice, and led the discourse against the legal structures that engender injustice. We have stood with our clients beyond courtrooms, advocating for their cause in local and international institutions and bodies, peoples’ tribunals, the parliament of the streets, and the court of public opinion. And indeed we are the lawyers of the poor and oppressed, of the exploited and persecuted, of the underdog and the marginalized. We are in the legal forefront of the fight against impunity against transgressions on our rights as individuals and as a people and we are on the ground as we fight in the legal trenches and foxholes.

In our legal and political battles, we lost some but won not a few.  We freed many a political prisoner including first responders health workers; stopped huge power rate hikes by big business; saved a life of a distressed migrant worker from the firing squad; punished a remorseless butcher; and now we are slaying the dragons of evil in the international fora.

To say that all these triumphs is due to us alone is to be immodest, because these were no doubt the culmination of all the ingredients of people’s lawyering: creative legal tactics, a strong mass movement, metalegal action, maximum public awareness, international solidarity and alliance work, sustained campaign, and mass media engagement.

But regardless of the legal victories and defeats, the real triumph was knowing that, despite our weaknesses and limitations, shortcomings and mistakes, we try to use our education, skills, training, experience and commitment to serve the people as their lawyers with a social context and conscience.

And now as we gather again here today amidst the horrendous carnage on the dirt poor; the vicious attacks on us and our colleagues in the profession,  the sell-out of our national sovereignty, the politicization or weaponization of the law by a blitzkrieg of legalized attacks and the legal contortions to silence dissent and divergence,  we send the message loud and clear: neither shall we be slowed down nor shall we blink.

So even as we miss Ben, Manny, Emil and many others who should have been sitting back there among us, we now close ranks and are even more inspired to turn against the tide as we will push and fight back. We shall conquer the challenges in people”s lawyering while unifying our ranks in order to strengthen the protection and advancement of human rights in the face of adversity.

Our Congress today is moreover highly significant and symbolic and also timely and urgent given the systematic legal assault and all-out war on those who will not conform and refuse to look the other way in the midst of injustice and absurdity.

It is our hope that this 5th National Congress will serve as our venue for us to repledge our commitments, fortify our ties, assess our work and come up with effective responses for the ardous trials ahead.

So today we come together again, in the presence of brave clients who deserve not only brave lawyers but the best lawyers that money can not buy, as well as in the company of our eminent guests, esteemed colleagues, supportive  peers, dear friends and allies, and the kin of our heroes who came before us, we say this — we may be battle-scarred but we will face the fierce fight with the same fire in our bellies that we had a dozen years ago against brutal, atrocious and disingenuous forces that blatantly and brazenly violate the most rudimentary of our rights and basic liberties.

Even as those who wield the dominant political power seem to be omnipotent and act with brazen impunity now,   we will, over time, together with the people and the broad forces seeking change, outwit and even outlive them.

And certainly the struggle for freedom and justice will outlast them. Good day and mabuhay ang mga abugado ng bayan na lumalaban! #

This site uses Akismet to reduce spam. Learn how your comment data is processed.

The International Association of Democratic Lawyers is a Non-Governmental Organization accredited to ECOSOC and UNESCO.