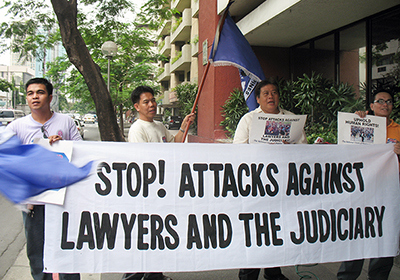 The IADL bureau condemned in its meeting in Paris  the continuing attacks against lawyers and judges in the Philippines and urges the Philippine Government to immediately take effective measures to stop the killings and disappearances.

WHEREAS, there has been a resurgence in extra judicial killings and enforced disappearances in the Philippines with the killing of forty-three (43) and the disappearance of seven (7) innocent civilians from January to October of 2008;

WHEREAS, government assurances to the international community of effective measures against human rights violations is belied by the continuing impunity in the Philippines including its failure to prosecute Gen. Jovito Palparan one of the suspected perpetrators of the killings and disappearances who was declared culpable for command responsibility even by the government created Melo Commission and recently declared responsible for abductions by the Philippine Supreme Court;

WHEREAS, members of the legal profession especially human rights lawyers play an important role, together with an independent judiciary, in the administration of justice particularly in the face of the escalation of human rights violations and continuing impunity;

WHEREAS, 22 lawyers and 15 judges have been killed in the Philippines since 2001 while many human rights lawyers providing legal services to the victims of human rights violations experience serious threats to their life, liberty and security;

WHEREAS, NUPL member Atty. Remigio Saladero, a high profile human rights lawyer handling hundreds of labor cases and who successfully argued before the Supreme Court against the constitutionality of Pres. Gloria Arroyo’s policies, was abducted by members of the Intelligence Service of the Armed Forces of the Philippines (ISAFP) and the police on October 23, 2008 from his law office;

WHEREAS, he remains imprison until today on the no-bail charges of Multiple Murder and Multiple Frustrated Murder which are considered by many as nothing more than trumped up charges to silence Atty. Saladero and instil fear among human rights lawyers from providing legal services to victims of human rights violations;

WHEREAS, there is a need for lawyers the world over to condemn attacks on lawyers and judges anywhere as these are essentially attacks on the practice of law and the administration of justice and a violation of the principle that everyone must have access to the courts and the justice system;

THEREFORE, the International Association of Democratic Lawyers resolve, as it is hereby resolved, to:

2. Urge the Philippine government to take immediate measures to stop the harassment of and threats against human rights lawyers, including the immediate release of Atty. Remigio Saladero;

3. Call on the Philippine government to desist from the filing of harassment suits and criminal cases against human rights defenders and opposition leaders critical of government policies as this violates the right to freedom of expression and petition government for redress of grievances;

4. Commit to organize a Mission which will involve trial observation on the case of Atty. Remigio Saladero and investigate the continuing serious attacks against lawyers and judges in the Philippines.

December 13, 2008, Meeting of the Bureau of the International Association of Democratic Lawyers, Bagnolet, Paris France.

This site uses Akismet to reduce spam. Learn how your comment data is processed.

The International Association of Democratic Lawyers is a Non-Governmental Organization accredited to ECOSOC and UNESCO.